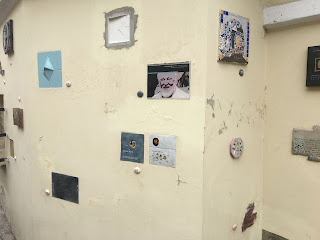 ﻿
During the long weeks of March and April 2020, for obvious reasons I have had much more time to focus and deploy energies on a number of releases…. from various SIGILLUM S works (such as the new album “Coalescence Of Time: Other Conjectures On Future”, as well as a major still TBD re-issue, a new 7” single and a collaboration with MACELLERIA MOBILE DI MEZZANOTTE) to the just published joint project with MARK SOLOTROFF (“Geological Plots & Subway Rifts”), new IUGULA-THOR recordings (the “Sisters” EP and a few more other surprises), preparation for the ENSEMBLE SACRÉ GARÇONS second album (“Demonization: These Worldly Powers”), finalization of a new SSHE RETINA STIMULANTS job (“Murked Clutter + Grandiose Punk”) and some other collaborative efforts with SUBTERRANEAN SOURCE too .
Meanwhile, I have also been experimenting with some further purely “solo work”, to be potentially released under my own name, as it has already been the case for material which falls more under a philosophically descriptive perspective than all my other ventures: here is a preview chapter of what is supposed to become a bigger book, in the form of a downloadable and/or streaming single digital track, “INTERVALLO D’OCCLUSIONE”…. inorganic realism on deep-ocean volcanic level.﻿
Pubblicato da NG5361 a 09:05