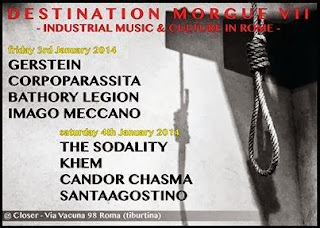 After the 1997 one-off single, CONFUSION, THE SODALITY will grace the Roman arena with a fully-fledged line-up which is going to include Eraldo Bernocchi and Paolo Bandera (both from SIGILLUM S and many other [individual or collective] acoustic oddities [such as IUGULA-THOR, ASHES, SSHE RETINA STIMULANTS, OBAKE, etc.), as well as Mark Solotroff from BLOODYMINDED / ANATOMY OF HABIT / THE FORTIETH DAY (and much more).

This is going to be a really special and historical event, bringing together in a live environment an unprecedented mix of all THE SODALITY’s angles……AND SO YOU SHALL!