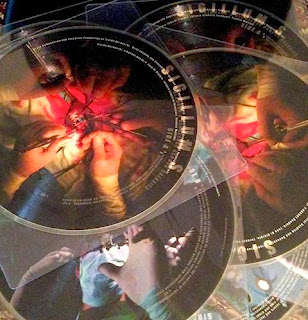 
“GLAMOUR & DECADENCE ACROSS GALAXIES “ features the extended line-up which has been storming stages throughout 2011 and 2012 in Augsburg, Rome and London, including the original members Eraldo Bernocchi (also of ASHES, SIMM, THE SODALITY, IUGULA-THOR, CHARGED, OWLS, OBAKE, METALLIC TASTE OF BLOOD and more), P.NG5361.Bandera (also of SSHE RETINA STIMULANTS, IUGULA-THOR, THE SODALITY, KOMPLET, SIDRA and more) and Luca Di Giorgio, together with the visionary multi-media talent of Petulia Mattioli and the scorching vocal overloads of Lorenzo Esposito Fornasari.


This new release explores further the obsession for psycho-geographic themes, expanding the scale into galactic territories and hyper-gigantic dynamics, thus replicating social deformities and trend measurements from urban decay to blackened stellar apocalypses… the actual result is in a way close to the mid – 80’s early SIGILLUM S works, with huge drones and electro-acoustic distortions meshing with noise explosions and deranged voices, but re-engineered in order to exploit at best contemporary technologies.


In order to present the outcome in the most effective and complete way possible, the medium of the vinyl Picture Disc 12” has been selected for the first time, employing its rotational power to display Petulia Mattioli’ s striking and surgery-oriented artwork.


“GLAMOUR & DECADENCE ACROSS GALAXIES “ has been produced by Eraldo and Petulia’ s VERBA CORRIGE in a limited edition of 111 copies (including also Download code) and is available NOW on http://sigillum-s.bandcamp.com/album/glamour-decadence-across-galaxies , as well as in selected occasions (shows) and from selected specialty stores / sites.