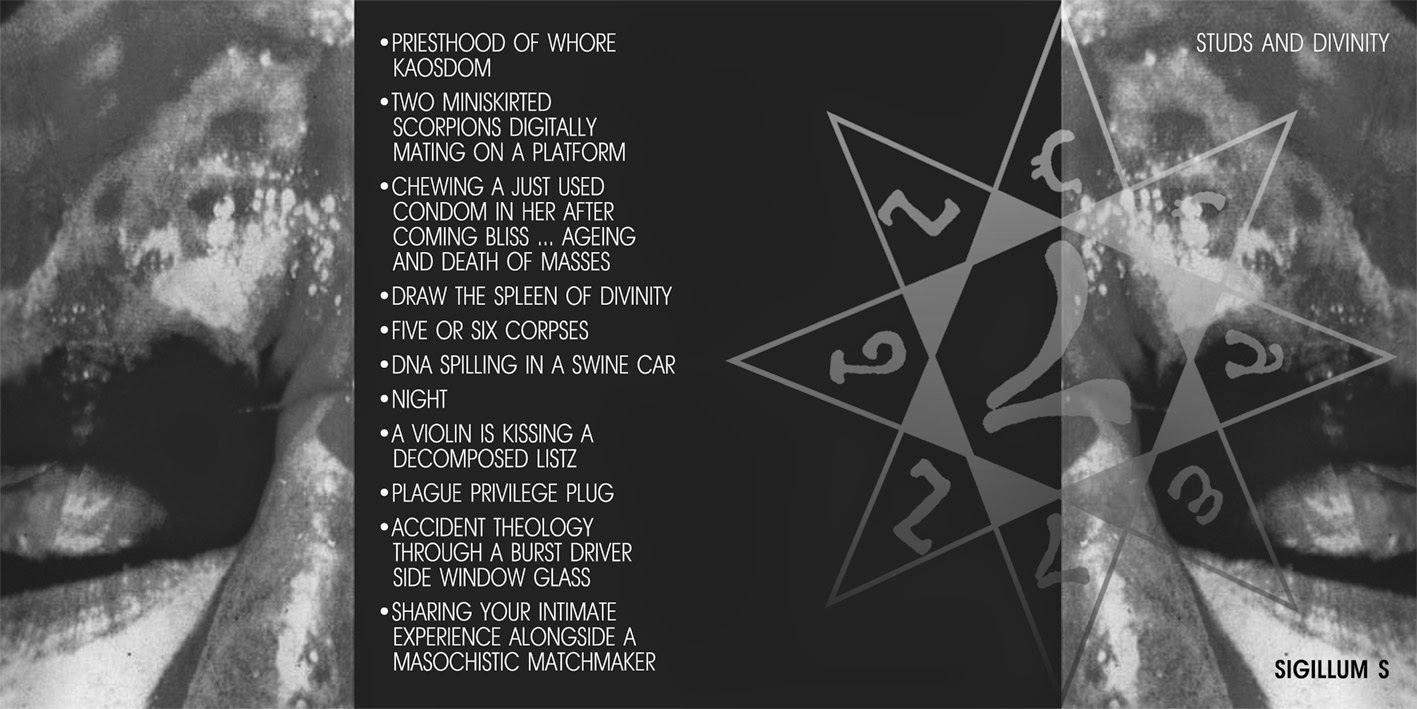 A very nice write up / review  of STUDS & DIVINITY on the AQUARIUS RECORDS website: get it there if you live in the USA (or also if you feel like it, of course) !
http://www.aquariusrecords.org/

SIGILLUM S  "Studs And Divinity"  (Monochrome Vision)  cd  14.98
Another obscure chapter in post-industrial history is reopened
thanks to Russia's Monochrome Vision label. Sigillum S is an Italian
project which began in the mid '80s, landing their first outing on the
tastemaking label Broken Flag in 1985. The trio mined the sex'n'death
concepts which Throbbing Gristle and SPK brought to the foreground
through their autopsy and porno collages as part of their social
critique through extreme imagery. Sigillum S was far more sensationalist
in their use of this imagery, to the point where much of their titles
hold the same poetic wordsmithery of death metal's ultra-violence. "Five
Or Six Corpses" and "Chewing A Just Used Condom In Her After Coming
Bliss... Ageing And Death Of Masses" are just two of the more colorful
titles to be found on Studs And Divinity, a super rare cassette
originally released on the cult-industrial label Minus Habens back in
1989. Crowlian ritual, dissolute hedonism, and sexual transgression were
some of the other theatrically 'taboo' subjects for Sigillum S (along
with plenty of other modern primitives from that era); but like Clock
DVA and their offshoot The Anti Group (TAGC), Sigillum S stood as
technologically savvy engineers of cybernetic noise, dark-minded
ambience, and sporadic rhythmic excursions that could transcend some of
their dodgier concepts. Studs And Divinity is one of the more successful
ventures of Sigillum S, opening with a scalding piece of high-frequency
plasma that spills through a minimalist/maximalist network of hiss and
white noise. The aforementioned "Chewed A Just Used Condom..." is a
cross between the roughly hewn loop practices of Phillip Jeck or
Christian Marclay and the depressively neo-folk orchestrations for
maudlin strings and electronics from Der Blutharsch or Novy Svet. For
such a title, the piece is surprisingly lovely. Elsewhere, splintered
electronics and flanging power-drones entangle within decentered
arrangements, splattered crescendos, and the occasionally rhythmic
lockstep that parallels what Greater Than One was doing around the same
time. Remastered from the original cassette and now fleshed out with two
bonus tracks from back then as well. Nice. 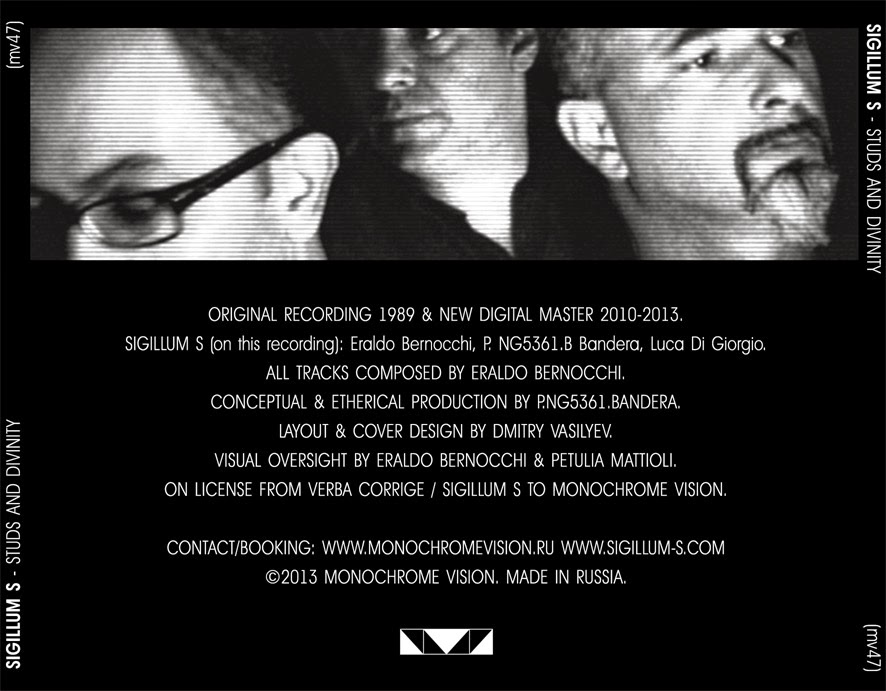 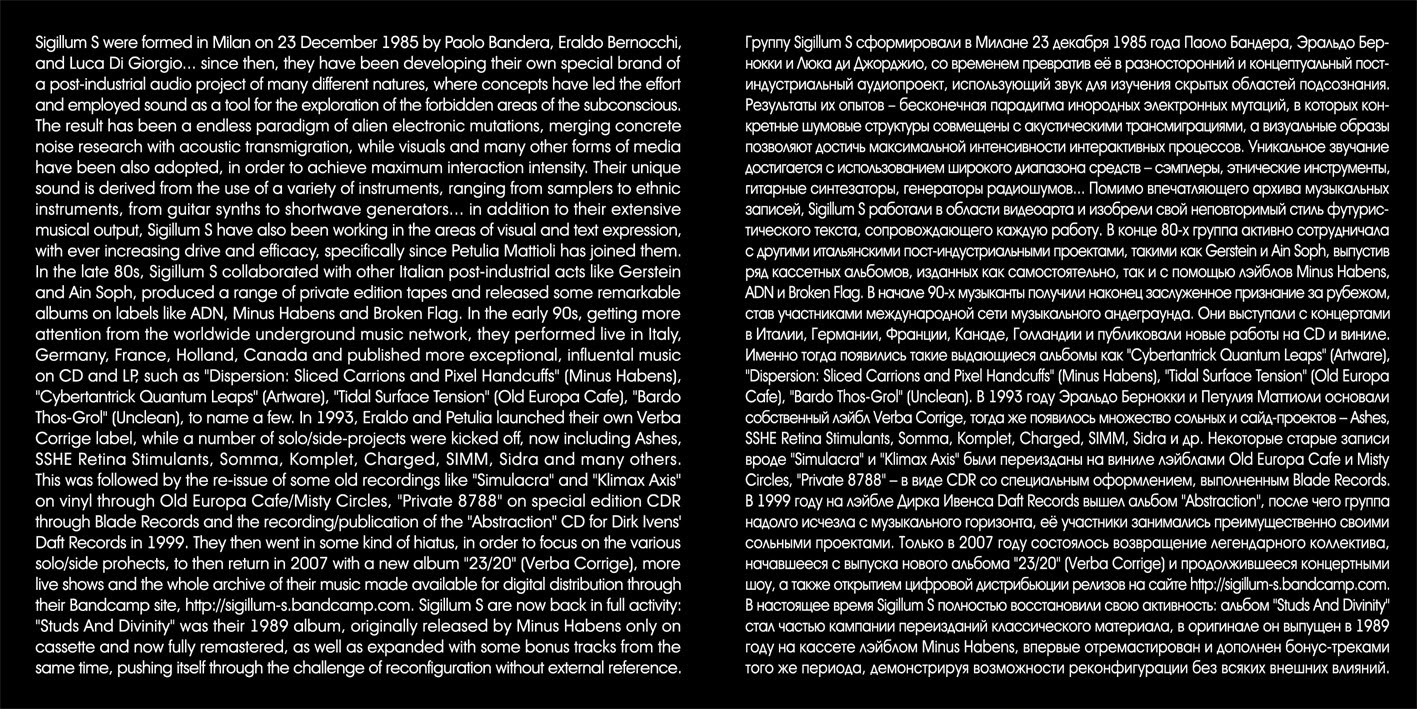 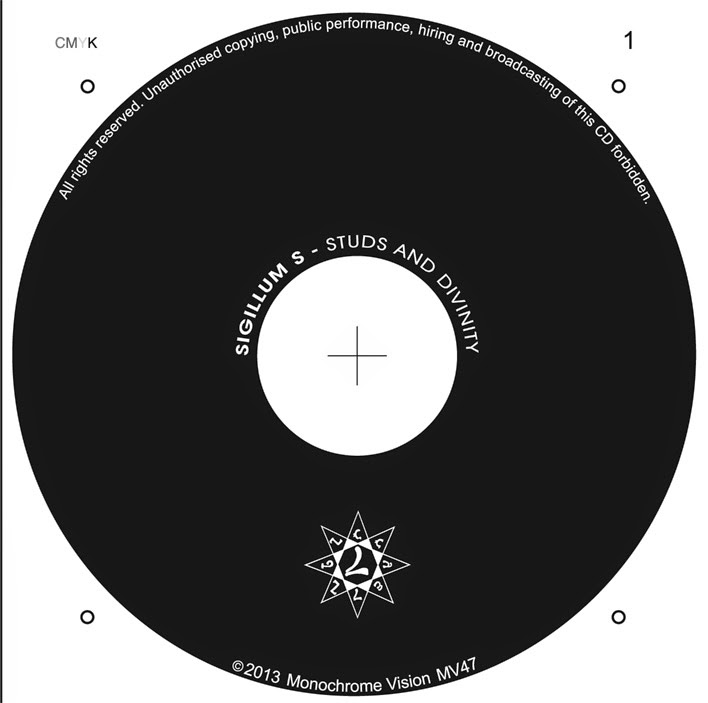